Fear Street: 1978 or "Outhouses Are Not Good Places for Sexy Times" 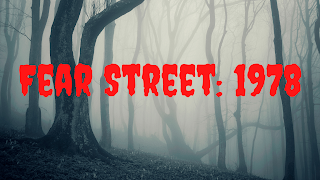 The second movie of the Netflix Fear Street trilogy basically picks up where the first one left off. You need to watch these in order - it's all connected!

The camera pans through a super dated home as the radio plays the news of Shadyside's latest terror - the Mall Massacre, so we know we're in 1994. We meet a new character, who has some real issues re: locks and clocks. This woman lives in anxiety. She nearly vomits in fear when she's woken by desperate banging.

It's Deena and Josh, trying to break into her house. Mystery woman nearly knifes her, before Deena pleads for her to listen ... they called her! She was the survivor from the Camp Nightwing Massacre of 1978. They beg her to help them - they have a possessed Sam tied up in their truck, and mystery woman nearly faints, but eventually gives in to tell them her story. So they sit as she reminisces back to the old days ... at Camp Nightwing.

As one would expect from a camp set between Sunnyvale and Shadyside, things are fucked up. A girl flees through the woods, before being caught by a group of vicious teens. They string her up to the hanging tree, where Sarah Fier once dangled, and burn her arm.

Some councillors run in to intervene. Strung-up girl is Ziggy, a Shadysider camper with a chip on her shoulder and a laundry list of strikes against her. She is nearly expelled from camp, but one of the councillors speaks up for her - it's Nick Goode, potentially evil future sheriff of Shadyside. He expects gratitude from her, she tells him to go fuck himself. I like Ziggy.

Her older sister Cindy is an uptight councillor with control issues, desperately trying to get the outhouses clean. She has a Shadysider boyfriend Tommy who tries to get sexy with her. No. Outhouses are not good places for sexy times.

She goes to find the other Shadyside councillors, and walks in on them graphically banging while smoking joints. Cindy nearly has an aneurism as Alice, the girl, taunts her. Clearly they have history.

Ziggy goes to the camp nurse to get treatment for her burn. The infirmary is empty and Ziggy finds a journal with all kinds of information about Sarah Fier and the Shadyside curse, including stuff about the most recent Shadyside serial killer, Ruby Land. And Nurse Lane comes in, and we realize she was Ruby's mother. And has researched the curse non-stop since it took her daughter. And is pretty intense about it.

Ziggy and Cindy have a massive fight - these sisters could not be more opposite, and Ziggy is so bitter it's epic. She accuses Cindy of trying to get out of Shadyside by being perfect, but joke's on her because no one gets out of Shadyside.

An aside, but I love these clothes so much. '70s camp clothes = style goals. Also, where do I get the playlist?

Cindy and Tommy are still cleaning when Nurse Lane comes into the mess hall with a big ass knife. She apologizes to Tommy, saying she can't save him, but she might be able to save others, since his name is on the wall. One way or another, he's going to die that night. He fights her off, but everyone is freaking out.

Cindy obsesses over the reason Nurse Lane snapped, so that evening while the campers are playing colour wars (Sunnyvale vs. Shadyside, of course), Cindy and Tommy break into the infirmary to go through Nurse Lane's stuff for answers. Alice and her boyfriend Arnie also break in, to steal drugs. They read Nurse Lane's creepy journal about Sarah Fier. She emerged from the meeting room missing one hand. Though she was hung and buried, without her hand her grip on the land will remain forever. When she is near, blood will fall, and the curse will last until body and hand are reunited. Lane also has a map of the camp, which is right over the old Shadyside settlement from 1666. It shows where Sarah Fier's house was, so they decide to explore. In the dark they stumble over graves. They realize Nurse Lane has been digging holes, trying to uncover Sarah Fier's hand!

Nick Goode tries to befriend Ziggy, helping her come up with a plan to bring down one of her tormentors. She starts to soften towards him. Not evil sheriff?

Councillors go into the ruins of Sarah Fier's home, and the witch's lair is amazingly terrifying. Tommy looks unwell. They see a light from beyond her fireplace; when they crawl through, they find a flame lit within carved markings on the ground - the witch's mark! Someone's been there recently. Names are carved into the wall, centuries' worth of Shadyside serial killers. Underneath Ruby Lane, a new one has been added: Thomas Slater. Tommy!

Oh my god, he has an axe. I just remembered about the man with the giant axe in the last movie. Oh god, he just axed Arnie in the head, that's not pretty. Alice and Cindy flee deeper into the caverns, Tommy right behind them. But a cave-in stops him from getting them. Now the girls are stuck in the cave, and he's free to murder campers. Tommy goes straight for the sweet nerd camper. No, don't kill him! This is very upsetting.

Meanwhile, Ziggy and Nick are having shenanigans. They lure Ziggy's tormentor into the outhouse on the promise of sexy times (again, outhouses aren't sexy. Am I wrong about this?), then cover her in spiders and cockroaches and lock her in. They flee to the camp's - I want to say vivarium? Reptile house? - giggling, and proceed to have a very cute kiss.

Down in the caverns, Cindy and Alice are not getting along. Cindy still refuses to believe in the witch's curse, while both me and Alice think she's delusional. Cindy storms away but marches around in a circle - they are super stuck down there. Until Cindy realizes the caverns are shaped like the witch's mark and they can follow it like a map.

At the centre they find - oh god, I don't know, a pulsating, fly-covered organ? Dear god, don't touch it! But Alice does, and hallucinates victims of the Shadyside killers, and she's surrounded by pilgrims missing their eyes. She freaks out and horrifically breaks her ankle, gross.

Murdered camper has been found. All councillors still alive are trying to track down the campers still playing colour wars, while Nick is being all manly and protective with Ziggy. Then she remembers she'd locked a girl in the outhouses and runs to get her.

Cindy finally gets tough and splints Alice's horrific break with a comb, confessing she had narc'ed on Alice back in middle school because she wanted to get out of town. The friends reunite, ready to take on the gd witch.

Then there is just so much graphic axe murdering. I found this upsetting: stop killing kids, goddammit! I'm not a horror film aficionado, but there's a reason why this is so disturbing. Fear Street 1978 broke a very basic rule of horror movies: thou shall not harm innocents. Jason, who Tommy is fashioned after, never hurt a child. But Tommy does! It's stomach-turning. Also, I didn't realize this until later, but only Shadysiders are murdered ...

Ziggy lets her tormentor out, then hears her sister underneath her. Alice and Cindy are under the outhouses. They try to climb up, and I know this isn't important to the story, but this is really gross. And then Tommy comes in and decapitated one of the councillors and the body falls into the cavern.

Nick and Ziggy hide from Tommy in the reptile house. Nick is stabbed saving Ziggy.

Alice and Cindy find a clue that Sarah's hand laid to rest on the stone right in front of them, and then emerged from the meeting hall - which is now the mess hall. Cindy follows the map to find the mess hall.

Tommy follows Ziggy into the mess hall, and that's where they all meet. Ziggy tries to trap Tommy in the pantry and stabs him, but he's too strong. As he strangles her, she wraps a burlap sack around his head - and now he's Burlap Head! Cindy jumps in, stabbing her boyfriend repeatedly until he is dead.

Alice emerges from hole, bearing the hand of Sarah Fier! All they have to do is put the hand with the body, and this nightmare will be over. Sarah was buried under the hanging tree, so they have all the pieces right there!

But then Ziggy gets a nosebleed all over the bones of the hand, triggering the curse. Shit, Burlap Head is going to come back, isn't he?

Now, wtf is the pulsing grossness? Oh, that's where the former serial killers are regenerated, and I think I'm going to puke.

Alice is so ready to end all of this, until Tommy revives and murders her. Sad, Alice was awesome.

Ziggy and Cindy run to the hanging tree and start digging like mad, as the serial killers surround them. I don't know who's the most disturbing. Ruby Lane is terrifying, the deformed child in a mask with a bat is also. The grinning deranged milkman is not my favourite. They find Sarah's grave, but her body isn't there. They look at each other, realizing it's over.

Tommy gets to Cindy and starts hacking into her, as the deranged milkman stabs Ziggy. I found this scene so disturbing. The sisters are looking at each other as these men violate and destroy their bodies, and it is so visceral. They die under the hanging tree, and the killers disappear.

But then Nick somehow survives and resuscitates Ziggy. She's taken away in a stretcher, and nobody believes her, maybe not even Nick. Although he clearly stayed close to protect her? And now here she is, 16 years later, crazy lady living behind a wall of locks and alarms.

Deena and Josh realize they have all the items they need, if they can get Sarah Fier's hand. It was left buried under the hanging tree, which is now ... the centre of Shadyside Mall's food course. Of course it is, all roads lead back here. They unearth the skeletal hand.

Deena gets to the woods where Sarah's body is, and reunites hand with body. Her nose starts bleeding, something that happens when the witch is near.

Then ... Deena is pulled into the past, and she's in Sarah Fier's body!

I am SO excited to watch the next movie, which will presumably give us all the details on how Sarah Fier went evil! Stay tuned ...