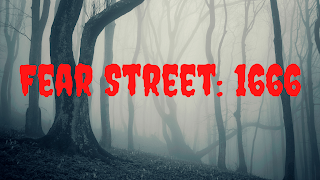 Time for the third installment of the Fear Street trilogy, and I am so excited to see how this creepy story wraps up! So far, things seem dire. Just when Deena and Josh think they can end the Shadyside curse, Deena is pulled into Sarah Fier's life more than three centuries ago!

Deena is Sarah, but when you see reflections of the character, it's a different, although similar woman, so Deena is experiencing what happened to Sarah. Amazing, I love this concept! She's living on a homestead, in the small settlement of Union, birthing pigs and being sassy. This is not a hounded witch, but a member of the community. She tells her father she won't marry Solomon Goode (!), despite the fact that his wife is dead and he is possibly interested. Another potentially evil Goode?

Oh my goodness, Kate and Simon are here! While they have different names and speak in English-y accents, they clearly remain Deena's naughty friends. All the characters in Union are played by characters from the first two movies, and I love this continuity. Constance and Abigail are Cindy and Ziggy from Camp Nightwing. And then Hannah Miller shows up and ... it's Sam! Sarah Fier and Hannah Miller are clearly as in love with each other in this time as they are in the '90s. I'm swooning, this is all very romantic.

Hannah is the pastor's daughter. Thomas (who played Tommy/Burlap Head in other films) is a creepy religious guy portending doom. Sarah is bringing a piglet to Solomon Goode, who is played by Sheriff Goode. They're friends, and Solomon seems kind.

Lizzie (Kate) is bringing Hannah and Sarah into the woods to visit the widow who lives outside the settlement, and apparently practices witchcraft (even though Soloman warned Sarah not to be out that night). The widow essentially knows Indigenous medicines and handles abortions for women, so obvs she's "evil." When the full moon rises before the sun sets, she's open for business, which does seem to be a bit of a sketchy time, although I think I want to put that on my business card.

When they arrive at her hovel, the widow isn't there but Sarah finds her grimoire. She reads a spell about Satan before the widow arrives and knocks the book away (hi, Nurse Lane!) Sarah shouldn't be messing with things she doesn't know about. Lizzie manages to find the "berries" she had come for (which is a cute nod to the fruit codes she put on her drug business in the first movie). The girls go to a clearing where the young people gather and eat crazy berries and it's a pilgrim party.

A grabby guy tries to feel up Hannah (her vanilla boyfriend!), and Sarah defends her. They run into the woods and have a hot and sweet makeout session. But somebody sees them! Hannah says they'll be hung for what they did, but Sarah says let them because she was never alive before now. Swoon!

Next day, everything is wrong. The pastor is behaving weird, and Sarah's father denounces her as an abomination. All of the food spoils suddenly and the happy Mama pig eats all of her babies. Sarah kills her with an axe. Something is stuck in the well, and it turns out to be the corpse of Sarah's dog.

Thomas has told everyone about Sarah and Hannah and says the devil has come. Wow, the whole town atmosphere changed from contented to messed up overnight. Solomon comes to find Sarah, and she confesses she's not sure it isn't her - because she loves Hannah! Solomon is sweet and comforting, telling her she can't be evil without inviting it in.

Screaming. Pastor Miller has locked all the children in the church and mothers are desperate to get to them. Sullivan breaks down the door. All the children are motionless in the pews. Oh god, and there's ... entrails on the floor? Oh no, it's eyesballs. All of their eyeballs.

The town goes into riot mode. Isaac (Simon) tries to tell them all they just drank apple jack and danced like fun-loving teens, but Hannah's ogre would-be boyfriend accuses Hannah and Sarah of laying with the devil. The town runs after the two girls who had been listening at the window. Only Hannah is caught by a mob, while the womenfolk look on terrified and baffled as the men go effing nuts.

Sarah comes to rescue Hannah, but Hannah tells her to run, there's no saving her. They've already decided she's guilty. Sarah decides she'd actually rather make a deal with the devil. I love this! If they want a witch, I'll give them a witch. But when she gets to the widow, she finds her murdered and someone has stolen the grimoire. Sarah thinks someone else has already made a deal with the devil, and Solomon believes her.

The men search Solomon's house while Sarah is there, so she hides in his cellar. Only it leads to the caves with the witch's mark! And the grimoire! It's all Goode! I knew he was evil! (Seriously, I was so excited at this point). Solomon was the one who saw Sarah with Hannah in the forest all along.

The disgusting pulsing thing emerges. Solomon has already sacrificed Pastor Miller, giving his name to be possessed by the devil. One person every few years for the price of power - that's how the Shadyside curse works. Solomon wants Sarah and tries to bring her to the dark side, but she stabs him. Reasonable.

She flees through the twisting caves, where she comes to the ... outhouse exit? I don't know how else to describe it. She tries to climb out but Goode gets to her. He tells her he loves her while attacking her, then cuts off her hand. She manages to crawl away and finds her way to the meeting house. Solomon is right behind her, claiming he found the witch.

There is a very disturbing torch-wielding mob. I feel like you're probably never on the right side of history if you are wielding a torch in your hand. Like, just don't. The girls are shackled, while their friends look on, horrified.

After a lingering look, Sarah confesses to witchcraft to save Hannah, saying she used witchery on her as well. As Solomon wraps her in chains, she says the truth will come out, and she will shadow him forever.

She is hung. Her friends dig up her body and move it to the forest, giving her a proper burial. Sarah Fier was good and she was loved. The truth is her curse to Goode - she would follow him forever until everyone knows. This was a devastating scene, and my god this movie is tragically romantic. Also, feminist, thank god. I have such issues with the "evil witch" trope, which was my one hold-back from loving the first two movies, that all the horror comes from an evil woman. Now that I know it comes from a long line of evil men, well. That makes more sense.

Part Two (haha, this is in like, every Fear Street book)

Back to 1994, Deena comes back to herself with all these memories. And, oh shit, Sheriff Goode just pulled up. He pulls a gun on them. Can I just say I called it FROM THE START. Sheriff Motherfucking Evil. The teens do what anyone would do in this situation, and steal his car.

So to recap within my recap, the Goodes of Sunnyvale trade Shadysiders to the devil. That person is possessed by the devil who kills and feeds off of that murder - and the Goodes get whatever they want. And this also means that - Nick Goode was the one who named Tommy Slater. The Sheriff was the cause of the Nightwing Massacre. When they tell Ziggy, she's horrified. Nick Goode might actually love her, but he is hella fucked up.

Now, all of the killers are going to be after the small group of people trying to stop them: Deena, Josh, Ziggy, and a zombie-esque Sam who is still growling in chains. They need to kill Nick Goode. And they're going to need help.

Then the best line of the entire trilogy comes up when they pull up in the yard of Martin, the guy they helped escape from jail in the first movie.

Martin: Let me get my coat.

I'm going to reiterate that it's messed up they kept the hanging tree as the centrepiece of the Shadyside Mall, but what else are you going to get in Fear Street? Deena gives an inspiring speech that they're doing this for all their loved ones, and prepare the Mall to some wicked Offspring beats. The plan: they will use Deena's blood as a lure to get each of the killers into a different mall store, then release the gate and lock them in.

Only they are stopped by the mall cops! This isn't going to go well, as the demonic killers begin to arrive. The psycho mailman stabber gets there first. I'm surprised Ziggy doesn't have a PTSD breakdown from seeing the thing that knifed her to death before, I think she's awfully resilient. The killers walk right by Josh and Ziggy and Martin, following Deena's blood tracks. Ooh, Ruby Lane hasn't shown up yet, she's the creepiest. She needs her own show.

The plan is working, some of the killers are locked away, but then they go still. Ziggy says it's him.

She faces Sheriff Goode down at the hanging tree and Carrie's him, dousing him in Deena's blood. Then they release all the killers, sending them after the man who raised them. But Nick grabs Ziggy as a shield, so maybe he doesn't love her all that much, god, so Deena slices her hand to distract them. She runs to a back part of the mall and finds a grate that leads to the cave system. Goode has been stabbed but follows her down.

Upstairs, the remaining team covers the killers in Deena's blood and they go after each other. Only Sam gets free and goes downstairs too. The malformed child and Ruby just showed up, and they are out for blood. Only Josh is ready to fight them.

Deena finds the pulsating evil, only to be tackled by Sam. Before she hurts Deena, though, Sam stops, as though remembering her, and Deena knocks her out. Nick is there and stabs Deena, but before he can kill her, she forces his hand on the pulsating evil.

Sarah Fier comes back, making him see all his victims from the start to the end. Then she possesses Deena's body and stabs him in the eye.

The killers explode and the pulsing evil is finally gone! Sam is back and they kiss. More happy news: Deena wasn't stabbed! She had made a stab-proof vest out of Fear Street novels and duct tape. My god, I love this movie!

The carved names on the wall disappear, as does the witch's mark. Sam and Deena leave the cave together, to a weird house mounted with goat heads everywhere. Yup, that would be the Goode house.

Bad things start to happen to Sunnyvalers. The Sheriff is named the Shadyside Killer, and Shadyside starts to feel hope again. Ziggy goes to find Nurse Lane, and they reconcile. Josh meets a cute nerdy girl. And Deena and Sam go to Sarah's resting place, where the carve: Sarah Fier, the first Shadysider. And they kiss! It all ends happily ever after. I love this so much. Nothing will destroy my happiness that ... oops, somebody left that pesky grimoire lying about. And in the credits, somebody reaches out and snatches it!

Guys, how much did you love the Fear Street trilogy! I got over my fear of horror movies to see this through, and I was not disappointed. 18 out of 18 tragic love stories that finally get their sort of happy ending!